This guide will walk you through some of the resources we have at Cañada College as well as some internet resources.  The research guide deals with the U.S. alcoholic beverage industry.  The main types of alcohol discussed are beer, wine, liquor, and newer entries like hard seltzers.

This guide also delves into the negatives and other important issues surrounding the alcohol industry and its effect on society.

To view content, navigate through the tabs at the top.

Alcoholic beverage, any fermented liquor, such as wine, beer, or distilled spirits, that contains ethyl alcohol, or ethanol (CH3CH2OH), as an intoxicating agent. A brief treatment of alcoholic beverages follows. For full treatment, see alcohol consumption.

Alcoholic beverages are fermented from the sugars in fruits, berries, grains, and such other ingredients as plant saps, tubers, honey, and milk and may be distilled to reduce the original watery liquid to a liquid of much greater alcoholic strength.

Beer is the best-known member of the malt family of alcoholic beverages, which also includes ale, stout, porter, and malt liquor. It is made from malt, corn, rice, and hops. Beers range in alcoholic content from about 2 percent to about 8 percent.

Wine is made by fermenting the juices of grapes or other fruits such as apples (cider), cherries, berries, or plums. Winemaking begins with the harvest of the fruit, the juice of which is fermented in large vats under rigorous temperature control. When fermentation is complete, the mixture is filtered, aged, and bottled. Natural, or unfortified, grape wines generally contain from 8 to 14 percent alcohol; these include such wines as Bordeaux, Burgundy, Chianti, and Sauterne. Fortified wines, to which alcohol or brandy has been added, contain 18 to 21 percent alcohol; such wines include sherry, port, and muscatel.

The making of distilled spirits begins with the mashes of grains, fruits, or other ingredients. The resultant fermented liquid is heated until the alcohol and flavourings vaporize and can be drawn off, cooled, and condensed back into a liquid. Water remains behind and is discarded. The concentrated liquid, called a distilled beverage, includes such liquors as whiskey, gin, vodka, rum, brandy, and liqueurs, or cordials. They range in alcoholic content usually from 40 to 50 percent, though higher or lower concentrations are found.

Alcohol consumption, the drinking of beverages containing ethyl alcohol. Alcoholic beverages are consumed largely for their physiological and psychological effects, but they are often consumed within specific social contexts and may even be a part of religious practices. Because of the effects that alcohol has on the body and on behaviour, governments often regulate its use.

Alcoholic beverages include wine, beer, and spirits. In beers the alcohol content varies from as little as 2 percent to as much as 8 percent; most lager- or ale-type beers contain between 4 and 5 percent. Natural or unfortified wines (such as burgundy, Chianti, and chardonnay) usually contain between 8 and 12 percent alcohol, though some varieties have a somewhat higher content, ranging from 12 to 14 percent. Spirits, including vodka, rum, and whiskey, usually contain between 40 and 50 percent alcohol. A standard drink served in most bars contains 0.5–0.7 fluid ounce of absolute alcohol. (One ounce equals approximately 30 ml.) Thus, a 1.5-ounce (45-ml) shot of vodka, a 5-ounce (150-ml) glass of wine, and a 12-ounce (355-ml) bottle of beer are equally intoxicating. 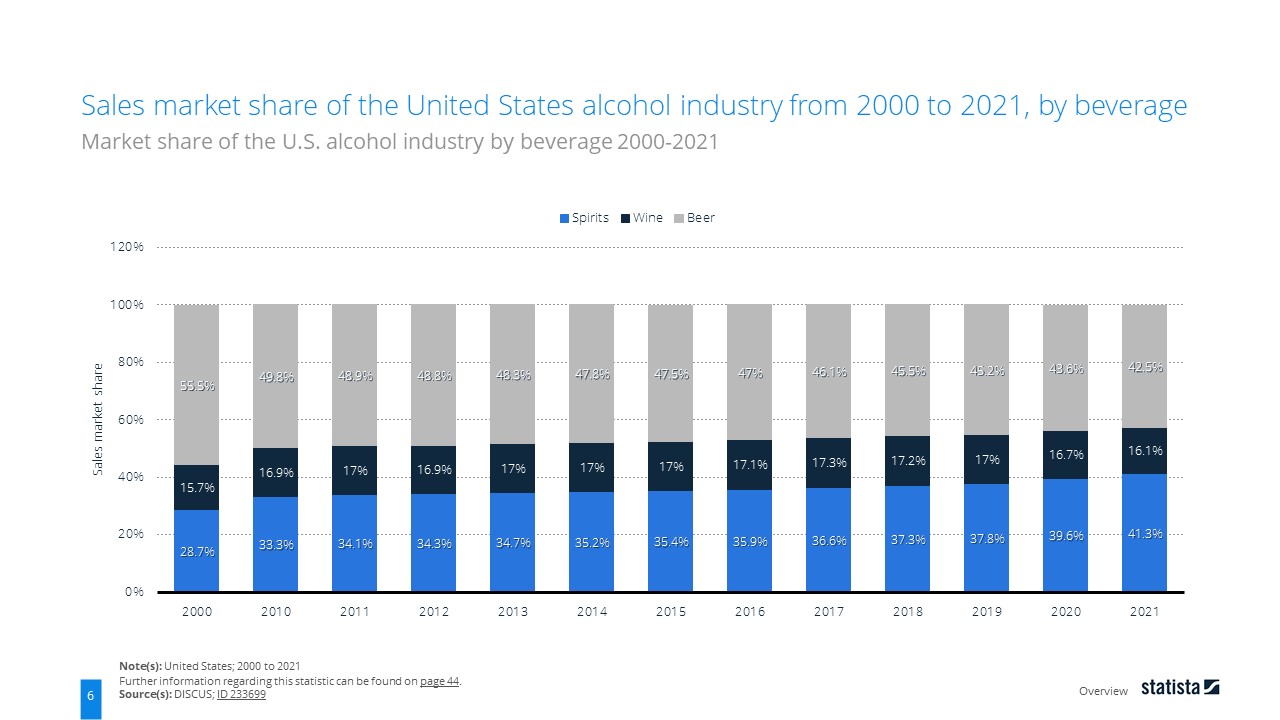 References
DISCUS. (February 3, 2022). Sales market share of the United States alcohol industry from 2000 to 2021, by beverage [Graph]. In Statista. Retrieved April 13, 2022, from https://www.statista.com/statistics/233699/market-share-revenue-of-the-us-alcohol-industry-by-beverage/